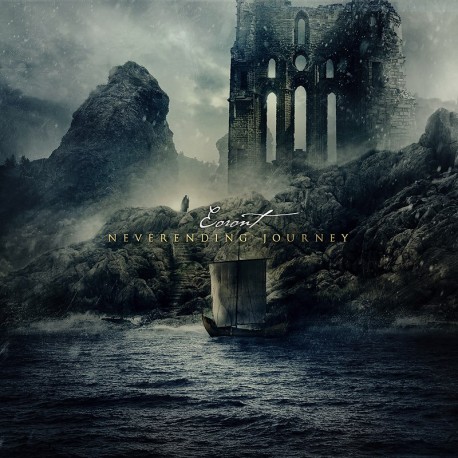 "This album is a living testament to how for we've come in terms of music production. There once was a time when one-man black metal was regarded as Burzum cloning bedroom stuff with varying amounts of artistry but generally low levels of talent and ability and even less production quality. From the incredibly professionally written music to the gorgeous, expansive production to the downright big budget artwork, I doubt anyone would have pegged this as one-man metal from the middle of Siberia.

Eoront is the solo project of one Foltath Eternum, the guy behind all of the music and instrumentation in hypothermic Russian black metal project Frozenwoods. Opting for a much more wide-screen cinematic style, Here Foltath conjures epics that are up for playing in the same ballpark as bands like Drudkh and, especially, more recent acts like Winterfylleth, Fen and Wodensthrone. Subtly symphonic keys bring to mind early Emperor, but the bouncy melodies definitely have a Norse or, especially, Gaelic feel that's vaguely folky (though there's no use of folk instrumentation on this album to speak of). Waltz time is used heavily throughout the album, with mournful guitar riffs playing stuff that wouldn't sound out of place on a Primordial album. There are usually two different guitar lines going at any given time, with the left channel guitar favoring thicker distortion and hazy fuller chords, while the right-channel echoes the riff in a slightly cleaner “lead” sort of fashion. It makes for a very thick, rich guitar sound. There's also a nicely audible, smooth-toned bass pumping along through the center of the mix, very clear at all times. While it tends to follow the guitars during faster sections, the slower parts (the center section of “Through the Wheatears Gold”) see the bass branch out into its own melodies to enrich the riff on its own terms. Keyboards are used to great effect, using either choral or string-emulating patches to add an extra layer of gauzy, shimmering harmony but without ever stepping on the guitars, which are by far the more important part of the band's sound.

Foltath really is a master musician. His drumming is nothing short of standard setting, shifting from passionate blasting when called for to more restrained playing with an emphasis on off-beat accents and cymbal splashes during the more bleary-eyed parts. His vocals are also something to behold, with a powerful black metal rasp dominating but support from his own clean vocals, often in layers, providing that little extra something that adds another layer of wonderment. There are even roaring gutturals in tasteful support in “Celestial Whirlpool”. In no aspect of Eoront's music does Foltath ever really show off; there are no flashy keyboard solos, intricate drum parts or shred guitar, with everything being played for the sole purpose of maintaining the powerfully evocative atmosphere and advancing each song's themes.

And the production! Oh, the marvelous production. Everything is so crystal clear and no instrument ever overpowers another. Every last drum hit and cymbal brush is captured in perfect glory. Keys float and soar but never sink into inaudibility nor do they ever get in the way of the guitars. The guitars! This album RIFFS. The guitars just plain sound glorious, remaining the focal point of the whole affair, Foltath never forgetting that while this may be atmospheric, it's metal above all else. This level of perfection in recording quality is extremely rare, let alone from a single guy recording everything on his own.

And it really does come down to the songs. Though, on a basic musical level, I'd say Eoront most closely resembles Wodensthrone, Foltath's songwriting surpasses the Brits'. Each section lasts exactly as long as it ought to, beauty and destruction have an almost uncanny balance and each segment of each song leaves you hungry for the next. Album centerpiece, the 14-minute “Downwind to the North”, brings all of the album's elements together in a perfect maelstrom of atmospheric black metal elements culminating in a powerful climax before giving way to the sound of crashing waves and the soothing, folky tones of the closing instrumental “Neilainne I (First Dawn)”. It's actually quite curious, as this project comes from so incredibly far from the ocean that the nautical themes somehow gain an even more fantastical, romantic feel.

This rivals Andy Marshall's new Arsaidh project as epic folk/atmospheric black metal album of the year, as far as I'm concerned. An essential release and a must-listen for anyone who fancies themselves a fan of this brand of black metal."