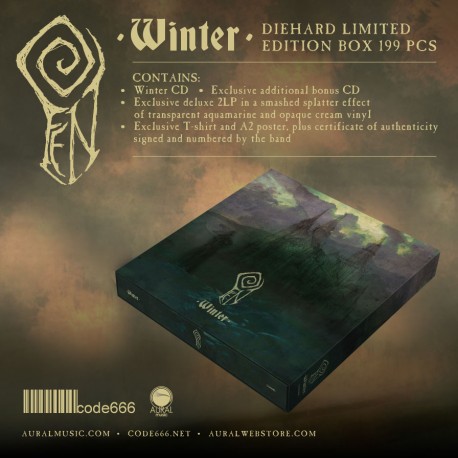 By buying this product you can collect up to 4 loyalty points. Your cart will total 4 points that can be converted into a voucher of 1,60 €.

INFO: this is the Deluxe Collector Box of the album, ltd to 199 copies.  including the standard CD, an additional bonus CD, the 2 LP with Side A/Side B in a smashed splatter effect of transparent aquamarine and opaque cream vinyl, an exclusive T-shirt, exclusive A2 poster, and a certificate of authenticity signed and numbered by the band.

Winter is the fifth album from Progressive Black Metaller FEN, a colossal piece of work for the English three-piece,  at once rich in sound, beguilingly delicate,  and yet laced with cold darkness. produced by of Jaime Gomez Arellano (Ulver, Primordial, Solstafir).

Consisting of six songs that are thematically and compositionally linked, each piece on “Winter” flows into the next, and, ideally,  the whole record is intended to be listened to in one sitting to allow the full journey to be absorbed. Musically, the band have sought to push themselves further than ever before and Fen’s trademark use of atmospheric Black Metal and delicate, spacious cleans,  has been married with aspects of 70s progressive rock, shoegaze and doom metal, with the intention of rendering ‘Winter’ as involving and as immersive a listen as possible.

Frontman The Watcher has summarised the album thus: “With ‘Winter’ we wanted to ‘return to the roots’ of the band so to speak but not in the clichéd, nostalgic way many bands do – instead, we wanted this record to represent the ‘essence’ of Fen in terms of tone, atmosphere and above all concept. This album therefore very much describes a journey towards sanctity and redemption across a landscape steeped in mystery, hints of forgotten darkness and sorrows long since drowned in the distant past. It represents the culmination of over 18 months of writing and rehearsing, pushing ourselves harder and harder as musicians – it is a lengthy and self-indulgent record for which we make no apology. Indeed, it is a fitting tribute to mark ten years of the existence of Fen.”