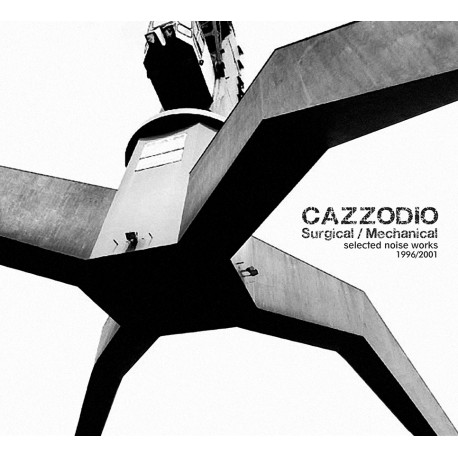 Forcing its way to recognition in the extreme electronics scene in the mid-1990s, and suddenly disappearing from the scenes in 2001, the obscure unit called Cazzodio left a burning mark on those who were exposed to it. Heavy industrial rhythmic structures, saturated analogue electronics and an enraged anti-authoritarian attitude, capturing in full the anger and the despair of those days. Remastered for maximum piercing loudness from the original master tapes, this double CD collects hard-to-find and previously unreleased material from the rusted years of Cazzodio, and will appeal both to stalwart followers and to a younger generation that was never exposed to this project's furious subversive assault. The Surgical disc revisits the harsh noise and unstructured power electronics sound of Cazzodio's early work. The Mechanical disc offers several of the harsh industrial heavy electronics tracks that appeared in compilations on both sides of the Atlantic, along with previously unreleased tracks recorded in 1997. If you thought that 1990s Italian power electronics could only be darkly athmospheric and morbidly nihilist, this long-awaited re-release will make you change your mind. Life is tired of rickety lovers.