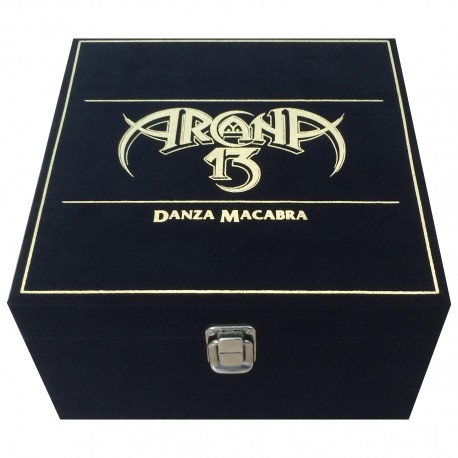 By buying this product you can collect up to 4 loyalty points. Your cart will total 4 points that can be converted into a voucher of 1,60 €.

Italy-based occult doom legion ARCANA 13, harvests the seeds of terror planted by the masters of Italian cult horror movies from the ‘60s and ‘70s, digging deep down to the roots of heavy, powerful and magical atmospheres to manifest a truly spellbinding musical and visual experience. Imagine the ominous mystique of Lucio Fulci’s classic The Beyond or Dario Argento’s Inferno set to a Black Sabbath or Pentagram-inspired soundtrack: this is ARCANA 13.

Danza Macabra includes a rendition of Goblin’s acclaimed theme from Dario Argento’s legendary Suspiria as well as the striking cover craftings of iconic horror artist Enzo Sciotti. With a career spanning over fifty years, Enzo Sciotti has illustrated more than 3,000 movie posters, including cult horror masterpieces like Lucio Fulci’s death trilogy The Beyond, City Of The Living Dead and The House By The Cemetery, Dario Argento’s Phenomena and Sam Raimi’s Army Of Darkness and Evil Dead. For ARCANA 13, Sciotti managed to revive the golden age of Italian horror and went beyond his limits with Danza Macabra.