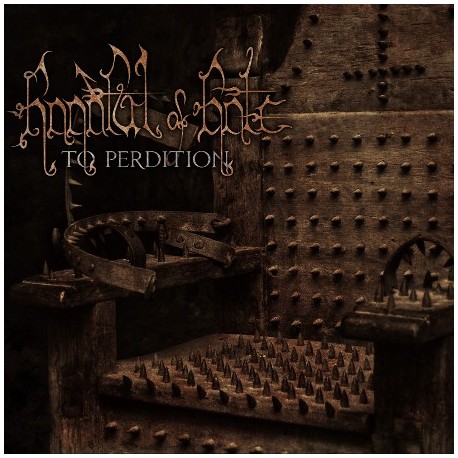 HANDFUL OF HATE "To Perdition" Digipack-CD

HANDFUL OF HATE
"To Perdition"
Deluxe Digipack-CD with booklet and bonus track (limited to 1000 copies)
.
File Under: Black Metal
label: code666
.
HANDFUL OF HATE are celebrating 20 years of career (the band was born in 1993) and have always been masters of the Black Metal spirit, with "To Perdition", they deliver 11 killer, instantly classic anthems of Hate and Blasphemy!
.
"At last, I have the pleasure ov reviewing one ov the very few bands to come out ov Italy that are actually worth a damn. Handful of Hate, one ov the more prolific Italian bands, has been around since ’93, vomiting forth blasphemies and dwelling in vice and sin that only a true black metal band knows how to do. And don’t be misled, dear readers, To Perdition marks yet another triumphant return to the halls ov Hate that we’ve all come to know and love! The guitars are what stand out first and foremost. Harsh, technical, and gloriously distorted, they screech forth unto the listener in such a way, one can’t help but fall in love with them. Especially in their third and fourth tracks, Far Beyond All Scourges and Swines Graced Gods, they move with such harmony in conjunction to the percussion that it sucks the listener right in. All ov it is diabolical in structure, vehement riffing that assaults the listener with 180 decibels ov unadulterated black metal fury. Don’t think that maddeningly technical riffing is all that this band knows how to do, though. They can show us moments ov brooding, boiling acrimony in certain intervals, such as the their tracks Caro Data Vermibus and Larvae. Expansive and deeply immersive, this band is truly a force to be reckoned with. And though it may seem bizarre to have discord rampaging behind the dissonant riffing, I find it truly impressive and can’t help but love their style ov doing things even more. Another thing I appreciate here is how the songs are short and sweet, to the point rather than dicking around with mind-numbing filler that most Italian bands tend to do. The album is only 11 tracks, but the majority ov them range from 3 to 4 and a half minutes, clocking in total at just over 43 minutes. Too often you find bands that want to do epic 15-minute-long songs but lack the mental focus and wherewithal to manage to keep the listener’s attention. Not Handful of Hate, though. No, these guys understand that quality is much more important than quantity in terms ov song length, especially in Words Like Worms, one ov the shortest tracks on the album. They pack so much content into such a short space ov time. It’s fucking glorious! After their last release, You Will Bleed, in 2009, it seems they’ve been very busy crafting this new masterpiece. And it can only be described as such because it transcends mere musical discord, something I know I’ll find myself revisiting time and again til they release something in the future, years down the road. Highly recommended!" 93/100 - Absolute Hell.net