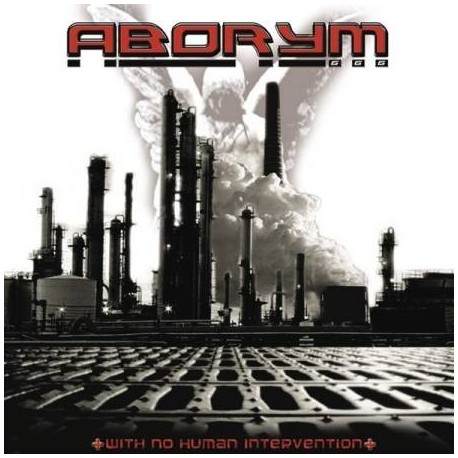 ABORYM "With No Human Intervention"

Info: New REMASTERED & RE-EDITED Version including 2 extra minutes of unreleased music! The third Strike from the absolute Masters of Post Black Metal, a true Unlimited Sonic Chaos Gnosticism... The album got AMAZING feedback from Media, Magazines and Radios! Contributions from: Bard "Faust" Eithun (Emperor, Dissection); Nattefrost of Norge Black Misanthropes Carpathian Forest; Irrumator from the UK nekro black kult Anaal Nathrakh, and featuring the Legendary Attila Csihar as Nekro Shamanik-vocalist. "Album of the Month" Terrorizer Magazine : "After achieving what must amount to the equivalent of finding the Holy Grail, with a 10 out of 10 in Terrorizer for the dark and hellishly grim 'Fire Walk with Us' this, the third album from Aborym, is a more dangerously overt beast The title track storms out of the speakers in a blaze of machine-pounding speed, guitars decapitating anything that moves in their line of sight. Aborym have made black metal more than just relevant, they have given the genre a visceral vividness. Their ability to master forces of primitive rawness, cosmic elementals, cold machinery and ritualistic pounding, blending them into decadent layers of speed, dark grooves of hate and reality warping sounds which comprise this album, dismembers sanity, as 'Faustian Spirit of the Earth' demonstrates. Attila in my opinion, is the very best black metal vocalist out there, sounding more unhuman than ever, as if using words just isn't enough, somehow he manipulates his larynx to create sick sounds that come from fuck knows where. 'With No Human Intervention' is a band pulling out the stops to push the extreme and avantgarde to new depths and quite frankly, making it look easy. Invoking the legacy of black metal past, present and future with 'The Alienation of a Blackened Heart'. The lyrics and vocals of Nattefrost from Carpathian Forest, Anaal Nathrakh's Irrumator providing digital-death drumming taking you to old school hell, and flinging you far into the future with Sasrof who created the Cd-Rom track 'Wolfsong' and Void's Matt Jarman who fucks with your mind back and forth on 'Does Not Compute' utilising table saw and chainsaw samples. And for those yet in doubt the whole album concept and title was courtesy of none other than Bard "Faust" Ethiun making this a legacy for majestic, grand, evil, hateful black metal 9,5/10"