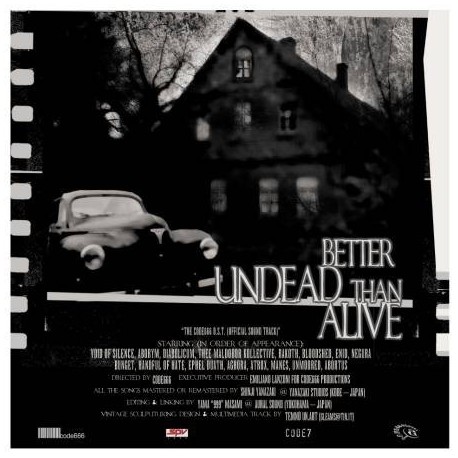 Note: 2 CD, 125 minutes of music, Massive cd-rom track for the price of a normal cd. The long awaited code666-Compilation finally out with Unreleased Exclusive tracks of: Diabolicum, Aborym, Rakoth, Bloodshed, Aghora, Ephel Duath, Atrox, Negura Bunget, Enid, Manes, Abortus, Void Of Silence, Thee Maldoror Kollective, Unmoored... Usually a Record-label Compilation is not that interesting for the fans, just a promotional tool, mainly directed to the Business Partners instead of being an appealing product. But there are some exceptions of course, and "Better Undead Than Alive", is one of those. This is the the first "code666 soundtrack" with all the songs linked together in one long track for each cd! We love the idea that all our bands, even if very different one from the other, are someway linked together by an invisible force code666 is that Force of course... We put together a lot of unreleased songs which have been recorded exclusively for this release, plus some rare, older unreleased tracks fitting the concept of the soundtrack, and finally we added an already edited song (in a remastered version) from all our albums a massive Multimedia Track is on disc 2, with tons of information regarding our label and our bands, exclusive photos, special mp3's like a complete live performance by Aghora at the Culture Room Club in Florida with the new line-up, plus special surprises, including the incredibly cool unreleased and never-seen-before Negura Bunget "Vazduh" Video, filmed in the Carpathian Mountains last year, etc...